In 1838, Elihu Phinney purchased an open plot of land in the center of Cooperstown from the Bealle family. Just two years after Phinney obtained the land, Abner Doubleday reportedly used Phinney’s field for the first baseball game. Elihu Phinney also purchased a residence on Pioneer Street with property that connected to the interior lot.
Before Doubleday Field was used as a baseball stadium and community gathering spot, several individuals and businesses used the space that is now the parking lot for their business and personal use. The Sanborn Fire Insurance Map from March 1887 shows that, in addition to a wood shed and ice house, there were stables managed by the Lettis family belonging to the Central Hotel. Between 1894 and 1903, a small building was constructed at the Main Street entrance of the parking lot property. This building housed Mogavero’s fruit stand as well as Noyes Lunch in 1906.
In the 1910s, with growing interest to establish Cooperstown (and Doubleday Field in particular) as the birthplace of baseball, money was raised to purchase the field from the Phinney family, and several baseball games were played on the unimproved land. Phinney later sold the land to the Cooperstown Chamber of Commerce for $5,000 in 1920. 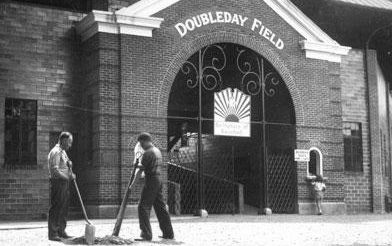